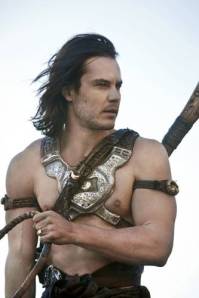 A friend went to the gala premiere – if you can call it such in Dublin – on Thursday. I went to see it on Sunday, after three days of general release, in a large suburban cinema. I very nearly gave it a miss because of the lukewarm reviews but persevered because it is exactly the sort of movie I would want to see and I loved the books. First off, it wasn’t even shown in Cinema 1, so that’s usually a bad sign. We got our choice of any seat except two when booking – a couple of hours in advance; I thought initially it was booked out because I’d never seen all the seats available before. And in the end there were less than a dozen people at the showing (9.00 pm to me is prime time). So, if they’re counting on a big opening weekend, it didn’t happen in Dublin.

The film itself was thoroughly entertaining, if unchallenging, fare; pretty much what I expected. The acting was as good as it could be given that the dialogue was pure blockbuster 101. The casting was, to say the least, a little misguided. I guess Ciaran Hinds was picked because he did a great job as Caesar in the TV series Rome, and he had his own costume. But Hinds is not the kind of actor needed for this type of film. He is far too talented to phone in this kind of performance. Brian Blessed revisiting his role in Flash Gordon would have been perfect, though with a lot less gurning. Willem Dafoe was tall and green and had four arms. Not quite typecasting but he did look a tad Goblinesque (supplied his own makeup?). Dominic West was absolutely brilliant in The Wire. But he was laughable in 300 and must be regretting beating out Fozzy Bear for the part here. He looks okay in a skirt – I’m sure my wife would expand on that if asked – but he was unconvinced by the part and therefore unconvincing; neither of us – me or Dom – believed in him as the villain and anyway, it was a cameo necessary to the plot but without a single bone on which the hang the meat of a character.

I like Taylor Kitch. He was great in Friday Night Lights. He was fine as the 19th Century ex-cavalry officer/adventurer John Carter, what little we saw of him in that incarnation, but he did appear a little bit lost as the Barsoomian Carter. And then there was the jumping. Let’s leave it at – I didn’t like it or find it believable. I found suspending my disbelief was inhibited by the fact that the movie never tried to make it less than cartoonish.

And then there was Lynn Collins who made a very pleasant Dejah Thoris, filling role and costume beautifully.

I guess I’m leaving out the director, Andrew Stanton, because he did a decent job. Not too much I can say about him though I doubt this is going to be at the top of his CV in a couple of years, but hey, at least it was live-action.

In truth, I wanted to like this movie more than I did. Every time I start to speak about it I find myself damning it with faint praise. I would love to see a sequel, as I feel a series would get better as it hit its stride and maybe Taylor Kitsch would begin to believe in himself as John Carter of Mars and really throw himself into the role. But I’m doubting that either director or stars are going to get a second bite at this cherry. For heaven’s sake, it was out-performed by a Doctor Seuss movie on its opening weekend in the US.

Bob Neilson lives in Dublin with his wife, two daughters, son, two dogs, one cat and a growing feeling of claustrophobia. In partnership with his wife he runs a successful retail business in Dublin city. His short fiction has appeared extensively in professional and small press markets and he has had two plays performed on RTE and one on Anna Livia FM. He also presented a radio show on Anna Livia for a year. He has had two short story collections published, Without Honour (1997, Aeon Press) and That’s Entertainment (2007, Elastic Press) as well as several comics and a graphic novel. His non-fiction book on the properties of crystals is a best-seller in the UK and Ireland.
View all posts by Bob Neilson →
This entry was posted in Films and tagged Andrew Stanton, Barsoom, Brian Blessed, Ciaran Hinds, Dominic West, Fozzy Bear, Friday Night Lights, John Carter, Lynn Collins, Taylor Kitsch, Willem Dafoe. Bookmark the permalink.