Beyond Buffy – an interview with Amber Benson 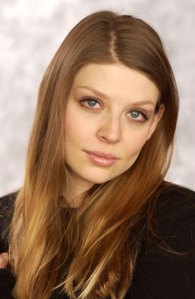 Amber Benson is a writer, director and actor.  She currently writes the CALLIOPE REAPER-JONES paranormal romance series for Penguin Books and her middle grade book, AMONG THE GHOSTS, is available in paperback
from Simon and Schuster.  As a director, she co-directed the Slamdance feature, DRONES, and directed (and co-wrote) the BBC animated series, THE GHOSTS OF ALBION.  Her acting work includes the Steven Soderbergh
film, KING OF THE HILL, and the indie, award-winning feature, RACE YOU TO THE BOTTOM.  She spent three years as Tara Maclay on the television series BUFFY THE VAMPIRE SLAYER.

Tell me one little-known fact about Amber Benson.

A little known fact about Amber Benson is why she doesn’t smoke – for one thing it’s bad for you and the other is she looks dumb when she tries.  Like a robot, all stiff wrist and mechanical inhales. It’s a terrible sight.

You have a really varied bio. Which of the disciplines, do you feel, will be your primary focus, long term?

For me, the thing I love the most and I think will be what I focus on
long term is filmmaking.  It incorporates everything i love – writing,
acting, directing – and in the end I get ultimate control!  It’s like
playing God…albeit the God of a small film crew, but it’s still
exciting.

Bowing, unworthily, Bob humbly asks,
What is your next film project?

Oh, Bob, off your knees. No need for all the theatrics.  Especially because my next film project (as an actor) is so insane and cool and weird that no one should bow anywhere near it for fear it might bite you.  It’s a little movie I like to call Dust Up. It’s kind of a Western, kind of a revenge movie and there’s a whole lot of cannibalism and drug taking involved – oh, and there’s an adorable baby in it, too (no drugs or cannibalism for the baby)!

Who else is involved (please name drop unmercifully)?

This was a labor of love, eschewing all the Hollywood trappings.  So
yours truly is the only person you might know from the cast.  The
others you will know in the future.

So, was getting cast in Buffy a big break for you?

It was more of a break then I realized because it gave me cachet and created a fan base that has followed me through all the varied aspects of my career.

Can you tell me about the Buffy break?

I actually just auditioned for the show like any good little actress.   It was supposed to be two or three episodes, but it suddenly became three years of my life.

How did it end?

I had actually found out about my character’s demise as we were
shooting the finale of the fifth season.  So, I had time to process
that it was indeed going to happen and it wasn’t going to be pretty.
But the more I thought about it, the more I realized from a story
perspective that it was something that needed to happen, was
necessary, even, to the evolution of the Willow character – and since
my character had originally been conceived as an extension of the
Willow character, she became (sadly) the ultimate sacrifice in the
psychological growth of that character.  The Queen Sacrifice in chess,
if you will.

Is there a sense of community on a show like that? Do you still keep inn touch with other ex-cast members?

There was a definite since of community on Buffy.  In fact, Joss Whedon would invite everyone over to read Shakespeare (out loud) on the weekends.  Afterwards, we’d all bum around and drink and eat and sing while Joss played the piano…it was through those weekends that Joss came up with the idea – or at least learned that it would be possible vocally – to do a musical episode of the show.
I wish I saw more of the folks I used to work with, but I blame babies.  Everyone has kids now and that makes it really hard to connect.  Everyone is just so darn busy.

What have you brought to your directing from the Buffy experience?

I think the biggest thing I took away with me from my time at Buffy, as far as directing is concerned, is that you just have to go out there and do it. Make your art and damn the consequences.

Do you have the same attitude to writing?

Yes, I have the same attitude toward writing.  Write what makes you happy, what you want to read.  That way if no one ever buys your books at least you’ll enjoy re-reading them.

Are you working on a book at present, or do you have one bubbling away in your hind-brain?

I am working on book #5 in my Calliope Reaper-Jones series!

Tell me about the series.

The series is about a girl whose father is Death. Death is run like a corporation and her father is CEO. When he gets kidnapped she has to come back to the fold and run the family business in his stead. Originally, it was conceived as a trilogy, but it did well and my editor asked for two more books. The fourth book How To Be Death just came out two days ago (2/28) and the fifth us, as I said, in the works.

You are on death row, probably innocent but them’s the breaks, scheduled to hang in the morning – what’s your last meal?

Cheese fries and a Dr.Pepper.

If you were an artist (musician, painter, dancer etc.) other than a writer/actor/director, and you were going to be remembered for only one piece of work (a one-hit wonder), what would that piece (song, painting, movie) be?

The one hit wonder I would like to be remembered for would be a stop motion animation movie about death based on  Pina Bausch’s interpretation of “The Rite Of Spring”.

Bob Neilson lives in Dublin with his wife, two daughters, son, two dogs, one cat and a growing feeling of claustrophobia. In partnership with his wife he runs a successful retail business in Dublin city. His short fiction has appeared extensively in professional and small press markets and he has had two plays performed on RTE and one on Anna Livia FM. He also presented a radio show on Anna Livia for a year. He has had two short story collections published, Without Honour (1997, Aeon Press) and That’s Entertainment (2007, Elastic Press) as well as several comics and a graphic novel. His non-fiction book on the properties of crystals is a best-seller in the UK and Ireland.
View all posts by Bob Neilson →
This entry was posted in Bloggerview, Films, TV and tagged Buffy the Vampire Slayer, Calliope Reaper Jones, Ghosts of Albion, Joss Whedon, Pina Bausch. Bookmark the permalink.