PEADAR O. GUILIN has been writing curious stories for as long as he
can remember. One of his school reports claimed that he had “a talent
for communication, which he abuse[d].” Since then, he has written
plays, published short stories, and performed as a standup comedian.
He has taken part in a project to translate the Linux operating system
into Irish and is fluent in French and Italian. Peadar lives in Dublin
where he works for a giant computer company. His first book The
Inferior was also published by David Fickling Books. You can learn
more about Peadar and his work at Frozenstories.com.

Tell me one little known fact about Peadar O Guilin.

Although I wrote a book from the point of view of — and very sympathetic to — a tribe of cannibals, I don’t eat any meat myself. I follow what might be called a “vegan”, or “strict vegetarian” diet.

Do you find your vegan lifestyle influencing the outlook of your characters?

Not yet. I think it’s very important to see things from the character’s point of view, rather than from mine. Many of the people I write about, live in harsh, impoverished circumstances where calories — regardless of origin — are received with gratitude and relief.

If they think like me, as I sit in a warm home with well-stocked cupboards, their outlook will ring false to my readers.

As for vegetarianism, there is a distinction to be drawn between those who refuse meat for health reasons and those who do so from ethical concerns. I belong to the former category, but I do believe that our distant descendants will regard the killing of animals for meat with the same horrified gaze that our era reserves for human slavery.

We’re not there yet. Even I’m not there, but in my mind, such an outcome is inevitable.

So tell me about your cannibals. Was there anything from real life that inspired the story or characters?

My cannibals are not from real life. The original idea for The Inferior came to me in a dream. However, when I started writing it, the story became a sort of laboratory where I could explore just how far human beings will go in order to survive.

I’m also very interested in exploitation. Almost everything I’ve ever written, in one way or another, is about the strong feeding on the weak,

Interesting answer. Could you expand upon it? What led to your interest in the strong/weak interaction?

I wish I could expand that answer.

I never deliberately write stories to include that particular theme, it’s just always there. I’m sure there’s a reason for it buried deep in my childhood — like the time I was sold into slavery, or that unfortunate occasion when a cannibal tried to run off with my leg 🙂

Tell me about your career to date and where you see yourself going from here.

I started out writing short stories, but if you want to make a living in this game, the only way is through novels, so that’s where I spend most of my time these days.

Writing the shorts still brings me great pleasure, however. For example, my story The Drowner appeared in the latest issue of Albedo One and will be podcast during the year by Pseudopod. Another of my stories, Heartless, came out just before Christmas and can be read for free on the Beneath Ceaseless Skies web-site.

As for the novels, my first two are part of a SF trilogy and both have been published in this country by the incredible David Fickling Books, which has brought us all manner of great authors from Philip Pullman to Siobhán Dowd to Mark Haddon and John Boyne.

I’ll start writing the final part of my trilogy next month, but in the meantime, I have two other works in the pipeline, “Eat the Drink”, a sort of Dystopian Irish Detective novel, and an as yet unnamed Big Fat Fantasy.

You mention making a living. Do you still have a day job and if so what is it?

Yes, I still have a day job — IT, basically. Fiddling around with databases.

Luckily, the contract with my publishers, together with the Irish artists’ tax exemption, means I can afford to do non-writing work on a part-time basis. Three days a week at the moment.

Do you still enjoy your work in IT or do you find yourself driven to turn pro at the earliest opportunity?

I do enjoy the IT! Not when the alarm is going off in the morning, or during emergencies when nothing is working right, but it’s fun solving puzzles all day and an introverted dweeb like myself needs to meet people. If I stayed at home all day, the chances are, I wouldn’t leave in the evenings either.

Apart from reading and writing, what do you do for relaxation?

I do a lot of cooking these days, mostly vegetables, very few people. I play football badly once a week and fight against hills on my bike in the summer. I have also acquired an unreasonable fascination with smartphones.

I haven’t been vegan very long, so I haven’t quite settled on what my favourite dish/comfort food is going to be yet. Almost everything that used to fit that profile contains cream or cheese or lashings and lashings of cow. I’m trying to discover a great dish for myself and to that end, I’ve been cooking at least one brand new recipe every week for the last few months. I’ve experienced lots of delicious food as a result, but as yet, there is no champion.

What are your long term writing goals?

I don’t know what my long-term writing goals are.
I used to have some — I wanted to publish a few books. These days,
however, there’s only “now” and “next” for me. I want to get my
detective novel and my almost-complete epic fantasy in front of a few
editors. I need to write the last part of the trilogy that began with
“The Inferior”.
I’ve had ideas for less immediate projects too, of course, but I’ve
shoved them into mental boxes at the back of my brain. They keep
leaking and interfering with the work I should be doing now, but that
can’t be helped and is probably the same for everyone. Day-dreaming is
what makes us writers, after all. Distant pastures are verdant.

Who or what were your major influences when you started writing and have they changed over the years?

Lots of writers influenced me from the start, even though I wasn’t
always aware of their influence while I was writing. Harry Harrison
was what I was aiming for consciously in my first book, but
unconsciously, I ended up with a metric tonne of Brian Aldiss.
The fantasy book I’ve been working on has definitely been been
infected by my enthusiasm for such books as Chris Wooding’s “The
Fade”. I love the world-building in that book, that wonderful
science-fantasy feel.

Do you read outside the genres? If so, what?

I read a lot outside the genres. About once a month I’ll grab some
non-fiction. I love a good history book and would be fond of popular
science and politics too. Recent favorites have included Barbara
Ehrenreich’s “Blood Rites”, “What it is Like to Go to War” by Karl
Marlantes and “Conquest” by Juliet Barker.
As for fiction, I enjoy non spec-fic genres such as “mainstream”,
“historical”, “mystery” and “thriller”. A mix of all of the above
works too, such as, for example, “The Quincunx” by Charles Palliser —
one of the best books ever written in my humble, exaggerated opinion.
Finally, I try to read outside of the English language when I can in a
desperate attempt to hold onto the languages I have learned over the
years. Each year I make sure to read one book in Irish and one in
Italian. “An Hobad” will be my Irish book this time round — not
outside the SFF genres, I’m afraid!

How much self-promotion do you do? Do you find conventions useful? Do you go to many outside Ireland?

I am on Twitter, but rarely tweet. I have a Facebook account full of
tumbleweed.
About the only thing I do social network-wise is to update my
Livejournal Blog once a week or so. Usually I talk about what I’m
reading or link to my latest reviews. Not much more than that, I’m
afraid.
As for conventions, I absolutely love them. I adore being on panels
and meeting with fellow readers and writers and enthusiasts. I read SF
because when it’s good, it blows my mind and when your mind has
experienced such wonderful chaos, all you want to do is rant about it.
Yes, conventions are wonderful.
This year, I’ll be taking part in Worldcon, Octocon, TitanCon and
Wexworlds at the very least. I can’t wait.

If you were an artist (musician, painter, actor, film director etc.) other than a writer, and you were going to be remembered for only one piece of work (a one-hit wonder), what would that piece (song, painting, movie) be? And why. 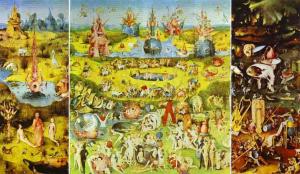 I would love to claim credit for Hieronymous Bosch’s “The Garden of
Earthly Delights”. It’s full of humour and horror and beauty, with a
kind of “Where’s Wally” level of detail that can keep you staring at
the thing all day.
Its strange creatures and even stranger human behaviour would put most
SFF writers to shame.

Bob Neilson lives in Dublin with his wife, two daughters, son, two dogs, one cat and a growing feeling of claustrophobia. In partnership with his wife he runs a successful retail business in Dublin city. His short fiction has appeared extensively in professional and small press markets and he has had two plays performed on RTE and one on Anna Livia FM. He also presented a radio show on Anna Livia for a year. He has had two short story collections published, Without Honour (1997, Aeon Press) and That’s Entertainment (2007, Elastic Press) as well as several comics and a graphic novel. His non-fiction book on the properties of crystals is a best-seller in the UK and Ireland.
View all posts by Bob Neilson →
This entry was posted in Uncategorized and tagged Ocotocn, Titan Con, Wexworlds. Bookmark the permalink.