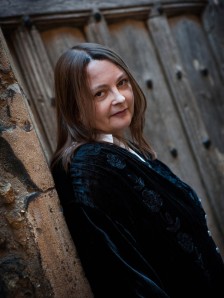 Anne Lyle was born in what used to be the centre of Sherwood Forest, and from an early age had a love of swashbuckling heroes such as Robin Hood. Unfortunately robbing the rich and giving to the poor tends to land you in a heap of trouble these days, so she settled for managing a web team for a major medical charity. She never forgot those Sunday afternoon movies, though, and still spends her spare hours planning sword-fights and deeds of derring-do for her fictional characters. Her debut novel, The Alchemist of Souls, is published in April by Angry Robot Books, with two further instalments due out in 2013.

Tell me one little known fact about Anne Lyle.

I can trace one of my ancestors back to 1430s Sussex.

Can you expand on that one a bit – the tracing process would be really interesting, plus the actual result.

Ah, you caught me out there! I haven’t personally traced anyone back that far. I traced my mother’s side of the family from Derbyshire mining villages back through the Industrial Revolution to rural Bedfordshire, using the online censuses. Then I put that tree online at Genes Reunited, and was contacted by someone who claimed to have traced a common ancestor back as far as the 15th century.

What I can say for certain, however, is that I’m one-sixteenth Irish. My great-great-grandfather went to sea, married an Irish girl from Birr and settled in Devonport for some years before returning to Derbyshire.

That’s the writer coming out in you. Tell me what led you to write your novel?

I’d been dabbling in writing fiction since my early teens, but it wasn’t until my son was at secondary school that I realised I’d let decades go by without making any real progress – I had a box full of half-hearted attempts at writing fantasy novels and nothing to show for it. I summoned up the nerve to join a local writers’ group – one that specialised in fantasy and science fiction, so I didn’t have to worry about being looked down on by litfic types! – and in 2006 I did my first National Novel Writing Month. (Check out www.nanowrimo.org.)  My debut novel “The Alchemist of Souls” is very loosely based on that rough fifty thousand word draft.

Take me through the steps for getting your first novel published.

I finished what became “The Alchemist of Souls” in September 2010 and started querying agents. About a week later I attended FantasyCon, where a writer friend introduced me to Marc Gascoigne of Angry Robot Books. It’s all a bit of a blur (well, it was past midnight in the bar!) but I went home from the convention with an invitation to submit sample chapters and a synopsis. I did so, and about four nail-biting weeks later I received an email to say that they loved the writing but would like some changes to make the book more obviously fantasy (and therefore more commercial).

We batted ideas back and forth via email, and eventually came up with a tweak to the concept that we were all happy with, so I knuckled down to the revisions and then sent the complete manuscript to Angry Robot in late January 2011. Three weeks after that I got another email saying that they wanted to offer me a book deal! I contacted an agent who had my full manuscript and asked him to negotiate the contract, and soon found myself with a three book deal and an initial publication date of spring 2012.

I should point out that this is crazy-fast. Usually it takes many months to find an agent and the same again for your agent to find an interested publisher, and your book may not come out for another two years after that. I was lucky enough to be in the right place at the right time – and most importantly, with a finished book to pitch.

Almost before the ink was dry on the contract, the whole production process swung into action, with the commissioning of cover art being the most urgent task. Popular cover artists have very busy schedules, and Marc was keen to have Larry Rostant, who specialises in historical subjects, do mine. I was sent draft copies of the cover art in August, and they just blew me away; Larry captures the mood of the book – and the character of the hero – so well.

On the text side, things went quiet for a while. Marc was very happy with the manuscript I’d handed over, so I just gave it the once-over before it went to the copyeditor. The final, proofread version is now (January 2012) ready for printing, the ARCs (advance reading copies) have gone out to reviewers, and it’s just a matter of waiting until they start hitting the shops in March!

As a fantasy writer, how important is research to your books as he ‘set decorations’ and backgrounds you are dealing with will be unfamiliar to many of your readers?

To be honest, it’s the “set decorations” that I worry least about – I’m sure most of my readers will have seen “Shakespeare in Love” or “Blackadder II” or one of the many, many other productions set in the 16th century, and so will be vaguely familiar with the look of Elizabethan London. What I try to focus on are the unexpected differences: the lack of privacy, the paucity of possessions in an era when everything had to be handmade, things like that. But also the unexpected similarities. The Elizabethans had “fast food”, for example. Cookshops sold ready-made hot food such as pies, since many houses didn’t have ovens, and theatre-goers ate oysters and hazelnuts instead of hotdogs and popcorn.

Hence I read a lot of social history, biographies, that kind of thing, to immerse myself in the zeitgeist of the era, before setting out to write the book. Little details like the names of real London pubs can be done on-the-fly when I’m editing, whereas knowing social minutiae can have a big effect on the plot!

If you had to go back to Elizabethan times, what would you miss most?

My initial reaction was “the Internet” – the contraction of my social sphere and the vastly reduced access to information would take a bit of getting used to! However in the longer term, I think I would miss sexual equality the most. We twenty-first century women like to complain about inequality, and indeed there are still imbalances that need addressing, but compared to sixteenth-century women we have it very easy indeed. To be transported back to an era when women were denied access to formal education or any role in public life (unless you were the child of a monarch), to be confined to the domestic sphere and treated as a second-class citizen…that would be irksome in the extreme.

I guess that’s one of the reasons most of my characters are men – the lives of typical sixteenth-century women hold little attraction for me.

Is there anything that would attract you to going back to Elizabethan times? (Answer as yourself and then if you could go back as a man – to see the difference it would make. Your last answer highlighted that difference and I’d like you to explore it, if you would.)

Seeing Shakespeare’s plays performed by the actors he wrote for would be the main draw, I think. We don’t really know for certain what the acting style of the period was like, i.e. whether it was very formal and stylised or more naturalistic. It would also be very interesting to see what the boy players were like, and how skilled they were at handling the complex adult roles that Shakespeare wrote (Cleopatra, Lady Macbeth, etc).

If I could go back as a man, there would be the additional bonus of being able to hang out with the actors and talk to them and the other great men of the era as an equal. That’s the main reason I made my main female character be disguised as a boy; I found it very difficult to justify an Elizabethan girl running around the city in the company of a bunch of disreputable young men!

You are on death row, sentenced to death, being hung tomorrow – what’s your last meal order?

Hmm…it would have to be something with plenty of seafood, so perhaps sushi or a good paella, though I might have to toss a coin since I’d find it hard to choose. To accompany it, a bottle of decent champagne and a bowl of freshly-picked home-grown strawberries with Green & Black’s vanilla ice-cream. If only commercially grown strawberries were available, I’d have them macerated in balsamic vinegar to bring out the flavour. Can you tell I’m a bit of a foodie?

Tell me about your day job? Is your fiction a reaction to it?

For my day-job I manage a small web team on a bioinformatics project run by one of the world’s largest medical charities. I wouldn’t say that my fiction is a reaction to it, except in so far as I enjoy leaving that high-tech environment behind me at the end of the day and immersing myself in a simpler world. I think that’s one of the reasons fantasy has overtaken SF in popularity in recent decades – now that our daily lives are full of computers and robots and other high-tech stuff straight out of the pages of a science fiction novel, our escapist literature has had to retreat into the past.

If you were an artist (musician, painter, actor, film director etc.) other than a writer, and you were going to be remembered for only one piece of work (a one-hit wonder), what would that piece (song, painting, movie) be?

A very difficult decision, but I think I’d have to say “The Cardsharps” by Caravaggio, a detail from which I use as my online avatar. It’s a beautiful painting in its own right, but it appeals to me as a writer because it tells a story. It portrays a con-man and his young apprentice playing cards with a rich but naive boy; the apprentice is slipping a concealed card out of the back of his breeches whilst the con-man signals to him over the boy’s shoulder. Also it was painted around the same time as the setting of my book, so I would get that chance to go back in time to late sixteenth-century Italy!

Bob Neilson lives in Dublin with his wife, two daughters, son, two dogs, one cat and a growing feeling of claustrophobia. In partnership with his wife he runs a successful retail business in Dublin city. His short fiction has appeared extensively in professional and small press markets and he has had two plays performed on RTE and one on Anna Livia FM. He also presented a radio show on Anna Livia for a year. He has had two short story collections published, Without Honour (1997, Aeon Press) and That’s Entertainment (2007, Elastic Press) as well as several comics and a graphic novel. His non-fiction book on the properties of crystals is a best-seller in the UK and Ireland.
View all posts by Bob Neilson →
This entry was posted in Bloggerview and tagged Angry Robot, Caravaggio, Fantasycon, National Novel Writing Month. Bookmark the permalink.