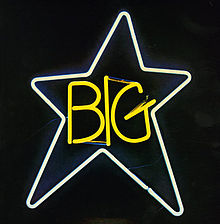 If there was ever a more ironic name for a band than Big Star, I’d love to hear it. Big Star are one of those groups that just about evey musician over the age of thirty will namecheck as an influence. Critics talk about them as though everyone with the most rudimentary interest in the history of pop music should know their work intimately. In fact, the oppostie is true. Almost no-one without an intimate knowledge of the history of popular music will have heard of them – ever. Neither will they have hear of the (now sadly departed singer/public face Alex Chilton. If they have heard him sing it will be on the seminal sixties pop song The Letter  when he fronted The Boxtops.

Big Star were named after a local supermarket rather than a supreme act of hubris but the universe didn’t seem to differentiate and shat on them from day one. They made three albums, two of them pop (powerpop?) masterpieces – #1 Record and Radio City. Of course, how many new bands would have the balls to call their debut #1 Record? Yet more irony. It should have been a huge hit but, for so many reasons that had nothing to do iwht the music, it flopped mercilessly. Check out September Gurls from Radio City.

Their third, variously called 3rd and/or Sister Lovers, has to be the most depressing pop album ever made – at least when compared to its ebullient forebears. The highlight for me is Holocaust but even this cheery ditty – comparing a girlfriend to a holocaust – performed at funereal pace fails to lift the album above suicidal in tone. I bought it knowing I would probably hate it and am currently persevering with it, but I may indeed be losing the will to live. Can anyone give me hope that there is light at the end of the tunnel or should I jsut consign my nice shiny LP to the bottom of my collection to gather dust and remain a cult taste that I simply don’t get.

Bob Neilson lives in Dublin with his wife, two daughters, son, two dogs, one cat and a growing feeling of claustrophobia. In partnership with his wife he runs a successful retail business in Dublin city. His short fiction has appeared extensively in professional and small press markets and he has had two plays performed on RTE and one on Anna Livia FM. He also presented a radio show on Anna Livia for a year. He has had two short story collections published, Without Honour (1997, Aeon Press) and That’s Entertainment (2007, Elastic Press) as well as several comics and a graphic novel. His non-fiction book on the properties of crystals is a best-seller in the UK and Ireland.
View all posts by Bob Neilson →
This entry was posted in Music and tagged #1 Record, Alex Chilton, Big Star, Radio City, September Gurls, Sister Lovers, The Boxtops, The Letter. Bookmark the permalink.